Development of Electrochemical Paper-based Analytical Devices: Optimization of Stencil-Painted Nanomaterial Electrodes for Bioanalytical Devices
Dr. Frédérique Deiss, Chemistry and Chemical Biology, Junior Faculty, Funded through Start-up Funds.
Paper-based devices have played a key role in development of low-cost diagnostics tools over the last decades [1]. They have advantage such as low-cost, portability, availability, user-friendly, easy to produce and dispose of, flexibility [2]. Although colorimetric tests are a common and easy way to detect presence of a targeted analytes, electrochemical paper-based devices are a good alternative when samples present color interferences or require a higher sensitivity for quantification [3]. The Deiss group is developing various platforms for bioanalytical and forensics applications (Figure 4). The REU student will have an impact in optimizing the stencil-painted electrodes to improve an ongoing project. In particular, our device for portable culture and electrochemical detection of bacteria, which relies on bacteria presence being determined by the defects it generates on the electrode [4]. The culture capabilities of the easy-produced paper and tape device has been proved previously [5,6]. Currently, some variations on the conductivity of the electrodes are observed over time and temperature without inoculating the bacteria, making the interpretation of results more difficult. The electrodes are commercial suspensions of carbon nanoparticles in organic solvent painted and consecutively dried to remove the solvent and ensure the continuous conductivity. Our hypothesis is that the steps involved in the culture aspect of the device such as sterilization by autoclaving and incubation at room temperature or 37.5°C, change the conductivity of the electrodes by removing some remaining solvent and/or modifying the carbon nanoparticles. 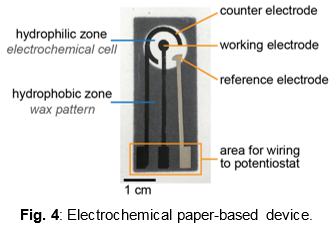 The REU student's objective will be to optimize the protocol of deposition to obtain a stable set of electrodes. This will include designing the patterns of the hydrophobic device and electrodes, cutting of the stencil with a CO2 laser cutter, wax-patterning of the hydrophobic barriers of the device, stencil-painting the conductive nanoparticles solution onto the paper, electrochemical characterization of the system by cyclic voltammetry (CV) and electroche mical impedance spectroscopy (EIS). The student will compile the results of the characterization obtained for different drying time and temperature, washing methods, sterilization methods. Once the fabrication of the electrochemical device will be successfully optimized, aka stable electrodes, the student will be able to utilize the newly developed devices for bioanalytical applications such as for bacteria detection.

This project will allow the student to learn skills in electrochemistry, materials (paper, suspension of conductive nanoparticles), design and fabrication of electrodes, temperature treatments and their effect, and basics of microbiology. The nature of the paper devices allows for rapid prototyping and thus permits undergraduate students to realize a full project in an intensive summer, developing their individual ownership of their project and generating enough results to communicate early on the projects and thus develop their oral, poster and written communication skills.
References: