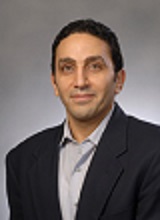 Tip-based nanofabrication (TBN) is considered a potential manufacturing tool for operations including machining, patterning, and assembling with in situ metrology and visualization. It also has the ability to perform in situ repair/re-manufacturing of the position, size, shape, and orientation of single nanostructures. Some applications of tip-based nanomachining include fabrication of micro/nanodevices, fabrication of metal nanowires, masks for nanolithography, nanowriting, nanochannel and nanopatterning. However, TBN process throughput is currently low due to limited tip removal speed, tip-surface approach, contact detection, desired force profile, and tool wear. A fundamental understanding of substrate deformations, separations and the tip is needed to achieve controllable tip-based nanomachining. Dr. El-Mounayri's group has developed a 3D computational model for tip-based nanomachining using molecular dynamics (MD) [54-62]. The MD model is used to investigate the effect of tip and substrate materials, crystal orientation, indentation depth, tip radius, tip speed, and predict normal and friction forces at tip-substrate interface. Material deformation, machined geometry, and nanoscale material properties including Young's modulus and hardness are also estimated. 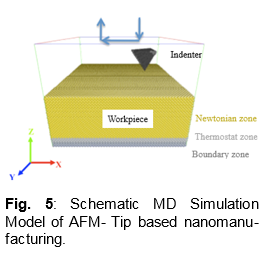 In this project, REU students will work on the 3D MD model to simulate TBN process for poly-crystalline materials and will assist in conducting AFM-based TBN experiments to validate the model. In addition, the students will work on extending the current MD model by integrating MD with continuum approach. This will account for the constitutive material behavior in the coupled regions. Students will also be involved in applying the information and data predicted by the modeling and simulation tool to guide the fabrication of nanochannels for practical applications such as nanofluidics.